Brabin was appointed Shadow Secretary of State for Digital, Culture, Media and Sport on January 7th, 2020.

The Batley and Spen MP had been raising a point of order in the House of Commons on Monday about journalists being asked to leave a Downing Street press briefing on the next stage of Brexit talks.

“This is everyday sexism, that a woman steps up and no one is listening to what she’s saying – what they’re doing is they’re commenting on her appearance.

And why do they do it? Because it’s a way to silence us. I’m not going to be silenced.” 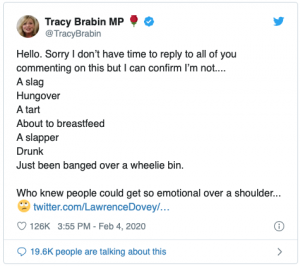 Despite the trolling there was some support for Tracy on Twitter

Tracy’s ultimate response was to auction the dress on EBay with all proceeds going to Girlguiding click here to bid for it.